Some of the most collectible Napier jewelry are the pieces made post-war as the company transitioned back to civilian interests. These bracelet designs still speak to the fashion savvy wearer. The gold-plated sterling silver pieces have a luster that has endured for decades. #napierjewelry #napierbracelets #postwarjewelry #napierbookfrom Visit us on Facebook @The Napier Book https://ift.tt/bNsqmpR

In 1945, the Army Quartermaster depot in Philadelphia announced that Napier would be one of the nation’s jewelry firms that would continue to manufacturer Army insignia and decorations during peacetime. From The Napier Book.

Although the designers at Napier were outstanding jewelers, silversmiths and artisans, they too, turned to other companies for design inspiration. This page was taken from a 1932 Cartier catalog that was part of The Napier Archive.

As discussed in the book, many catalogs from other companies were used either to examine the marketplace and current trends, or for design inspiration. The Napier archives contained catalogs with examples of the finest joaillerie to competitors such as Coro, Trifari, and Whiting and Davis.

Jewelry of this style was referred to as “Court Jewelry,” modeled after the exquisite jewels for the Monarchy. Napier surprisingly design and manufacture an extremely limited number of  “Court Jewelry” pieces.  An example of this type of jewelry can be found in chapter seven, Napier 1930s-1940s.

You can read more about this story in the post “Napier, Design and Inspiration” with your purchase of The Napier Book as a free member of “Exclusive Napier Club.” In the 1950s, boutique jewelry, a version of higher-end jewelry was seen in finer department stores across the nation. Napier, mostly known for its tailored lines, decided to develop a full-couture line of fashion jewelry. In its ensuing design history, Napier for decades, created pieces that held the prestige of “Boutique” jewelry. Here are two examples of 1950 and 1960s earring designs. 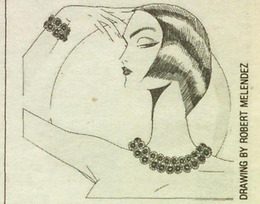 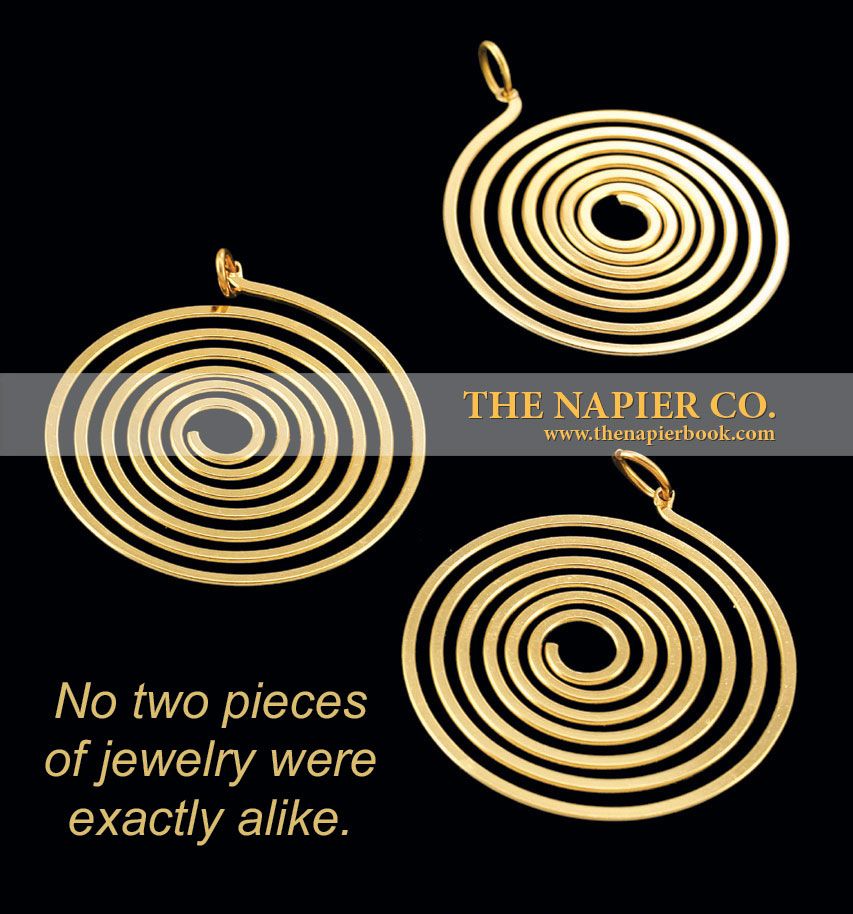 The unique detail of Napier’s jewelry was often the result of designs created in Napier’s Wire and Metal Bending Department. These designs were either hand-formed, or created with the assistance of a jig to bend into the desired shape. No two pieces of jewelry were exactly alike.

Napier’s unique designs required that many of the pieces be hand-manipulated. This process of wire bending, gave Napier a unique style. Many of the findings or filigree (pierced metal) components were hand-shaped into form. Hence, no two pieces of jewelry were alike.

Purchase The Napier Book today at the unbelievable price of $50.00 and receive a FREE NAPIER DVD* while supplies last. This is a $178.00 value for just $50.00 plus shipping! Buy here by clicking on the red text FREE NAPIER DVD WITH PURCHASE OF BOOK. 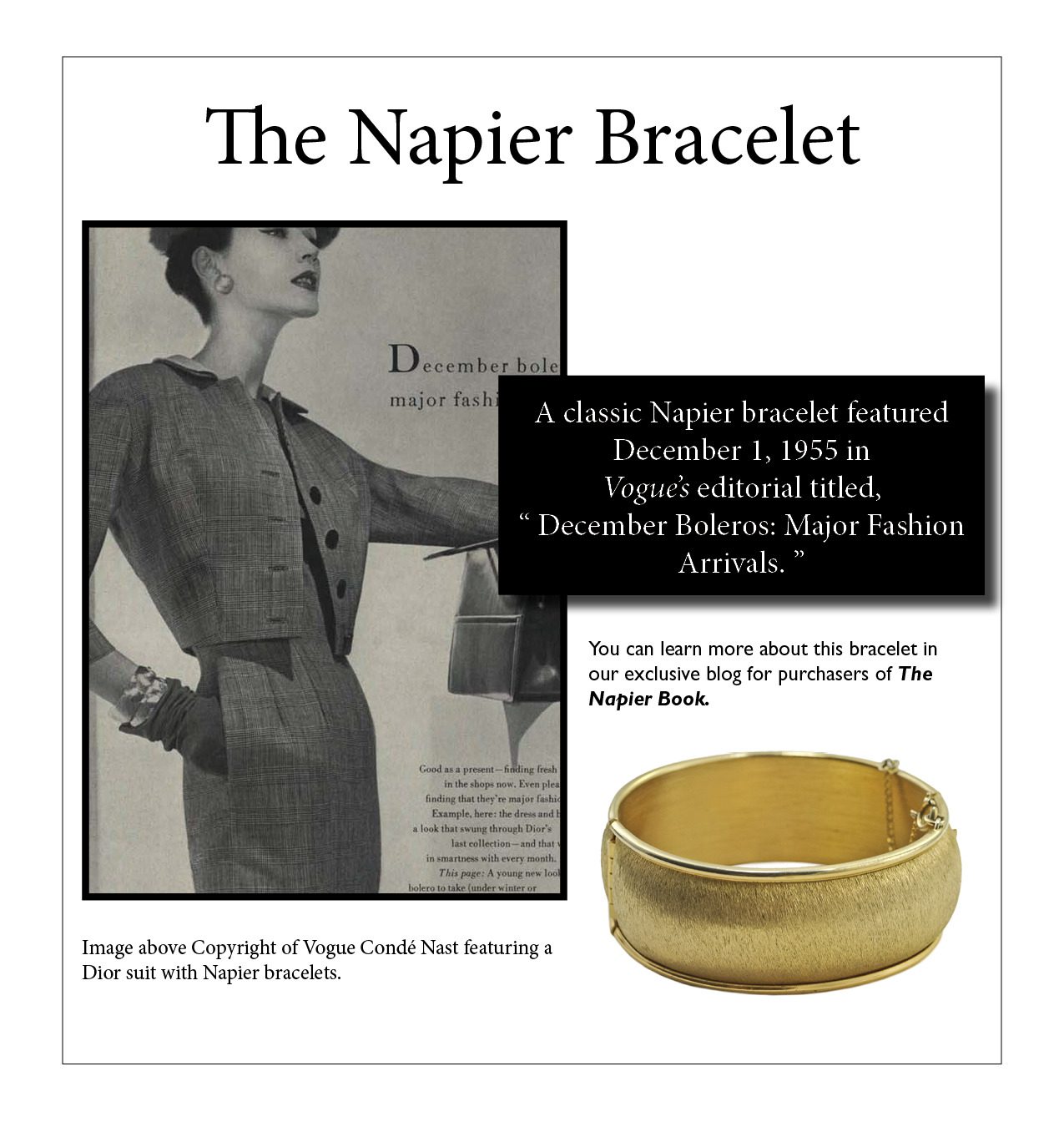 First used in 1922, this hinged bangle bracelet remained a staple in the line for over 70 years. It can be found with many surface patterns, including polished, textured, basket weave, and gold or silver tapestry. The bracelet has a characteristic “lip” around the edge as seen in the bracelet above.

Or History of a Trademarked Bracelet: The Dolly Madison Bracelet

This article explains when the trademarked bracelet was first used by The Napier Co. 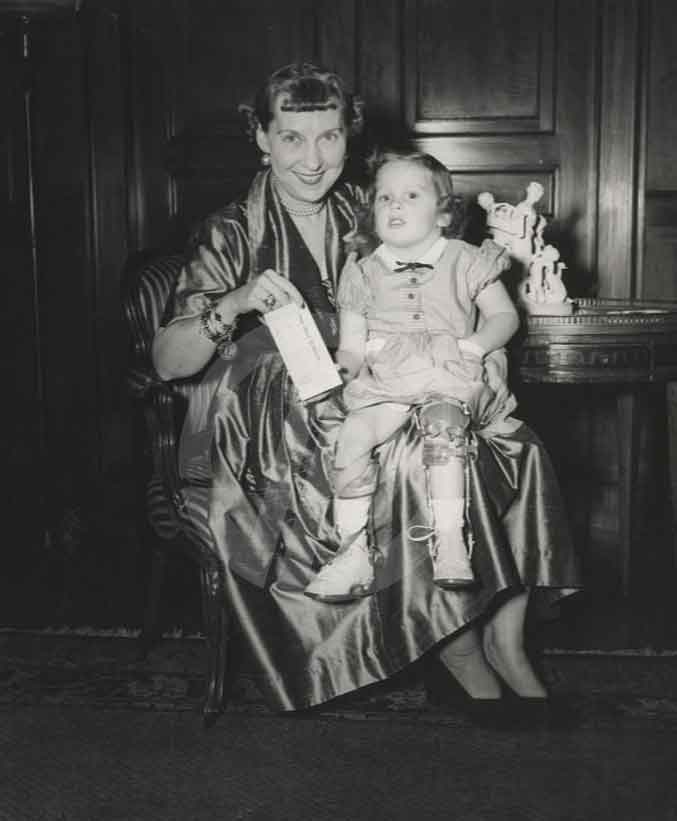 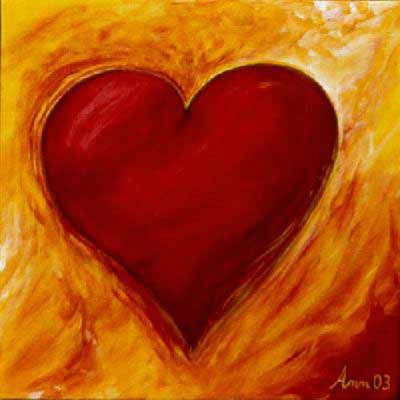 5 Tips to Choosing the Perfect Piece of Jewelry Choose a Gift She will Feel Confident to Wear Often

Selecting a piece that piece that represents her style isn’t as difficult as you may think when it comes to vintage jewelry. Most dealers have an inventory which spans about 110 of years fashion adornment. Dealers often offer a wide variety of basic-style considerations with even more sub-genres within style groups from which to choose.

Buy a Piece in Her Favorite Color

Vintage jewelry offers the biggest selection of color and texture ever imaginable. Stones, crystals, cabochons and beads were often imported from Europe using sophisticated manufacturing and cutting techniques. Today’s jewelry is frequently adorned with plastic and hard resin stones simulating the old rhinestones and more expensive glass used in vintage jewelry. However, the durability and sparkle cannot match the old-world components. Note: many sophisticated couture designers with a connection to vintage jewelry do understand this and use only vintage components in their designs.

With a gift of a glitzy rhinestone suite, your lover will always be ready for an evening out wearing her “little black dress.” Besides making her feel sexy, a well-designed glitzy rhinestone set is an instant conversation piece—a perfect segue for unexpected introductions.

Decide on a Vintage Novelty Piece if She’s Playful

If your lover isn’t the glitzy type or isn’t into bold jewelry, a playful “novelty” piece can be a fun gift. Vintage jewelry from the 1930s and 1940s offers many fun and wacky pieces from silly figural pieces to “motto” jewelry from the war. Pieces are often constructed in unusual or unexpected materials, such as wood, nuts, plastic, cork, raffia and more. Jewelry selected from this era offers great insight into America during some of its most challenging industrial times. The cleverness of manufacturers to fulfill a woman’s need for adornment and expression have never been as ingenious as this period of time.

The Gift that Keeps on Giving

To impress a lover, one can also share about organizations that study vintage jewelry and its history. Everything from the period of manufacture, to the designer and components used in manufacturing is studied by jewelry enthusiasts, jewelry historians, collectors, and dealers. Since the gift can represent a favorite decade or era, theme, or color, collectors groups can provide a continued meaning and history to the special gift. Costume Jewelry Collectors Int’l (CJCI) is one such group. 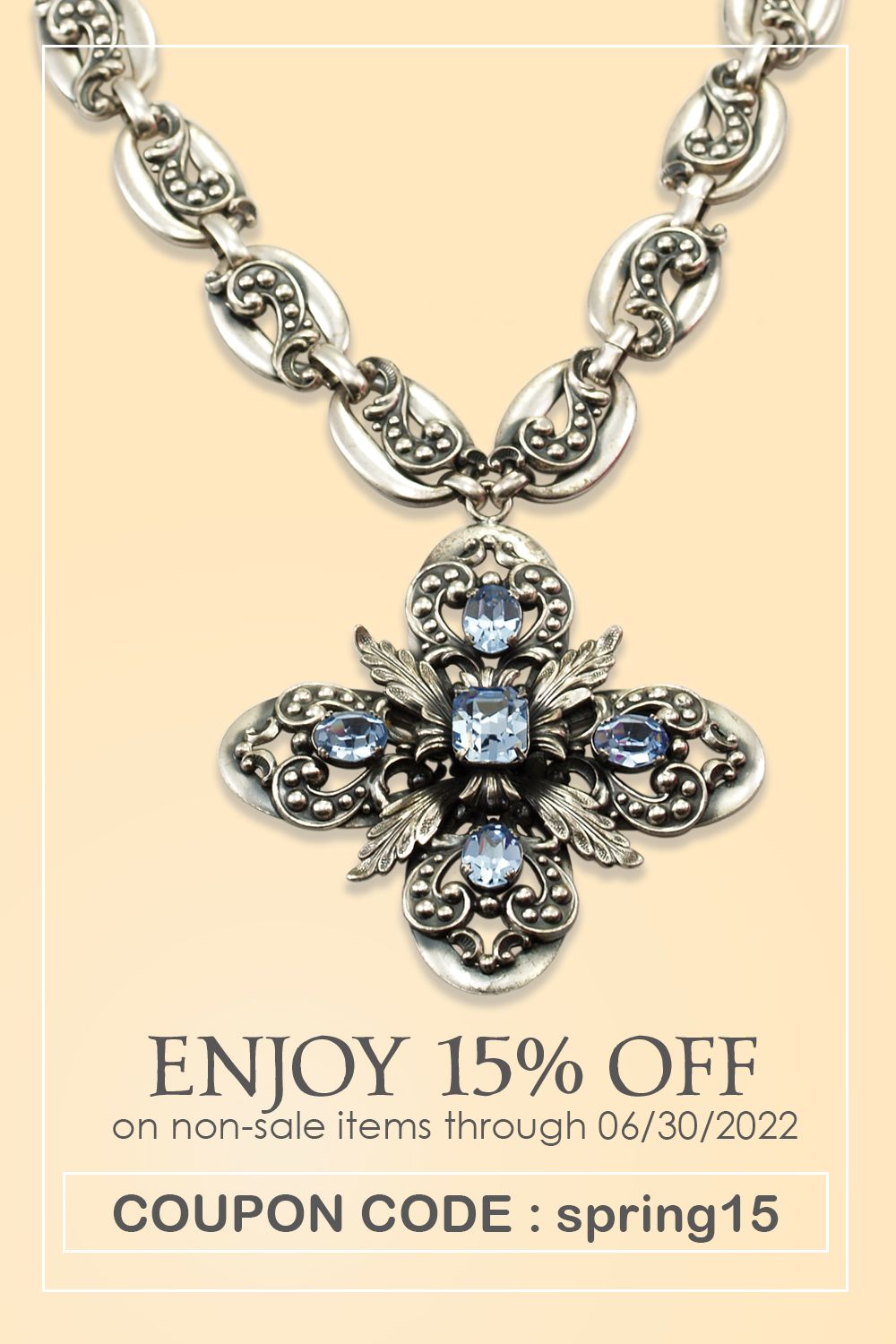