As a jewelry historian and a collector, I am always seeking to know who designed a particular piece of jewelry. But as the history of early fashion jewelry manufacturers fades into the sunset, determining the authorship of design isn’t always an easy task. For some companies like The Napier Co., designers did not take personal credit, except for rare occasions when design patents were filed, competitions were entered, or special marketing campaigns were launched.

And if one based his or her assertion on findings and stampings only, one could likely be wrong. In fact, a design component could have originally been used by Mr. Wm. Rettenmeyer in the early 1900s and reused again in the 1950s in a design created by Mr. Eugene Bertolli. Did each man design the respective piece? Well yes, they did!

Jeweled belt stay with bezel-set faux jade pear and square-shaped cabochons. Displaying the same stamping as that used in the image below. 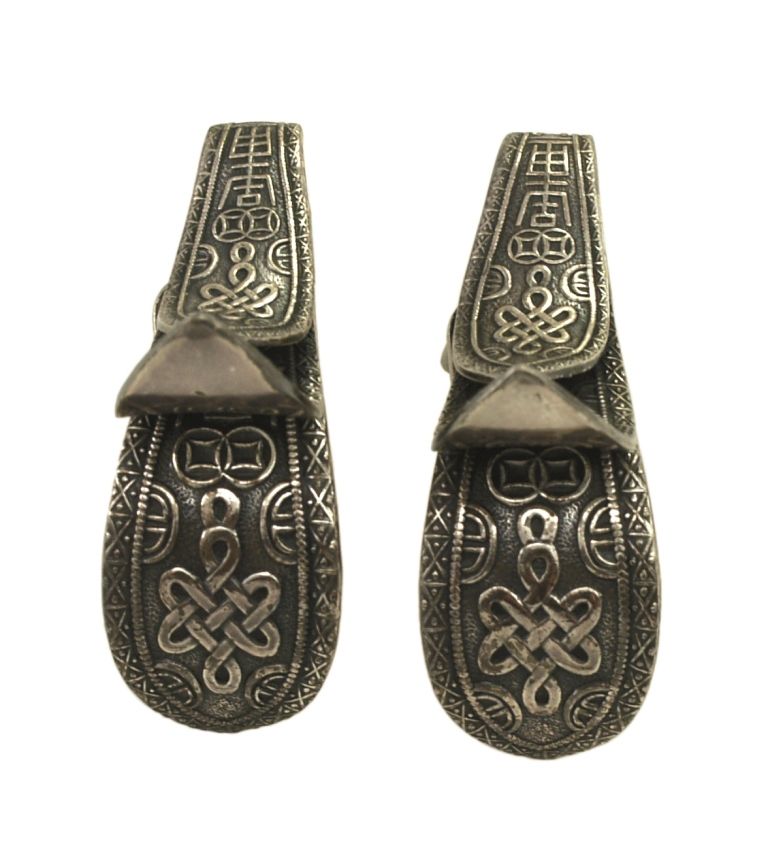 Earrings utilizing the same two stampings as those original used for the belt stay shown above made some 40 years earlier.

The Napier Co. had a very skilled tool department and with great skill could rework dies used decades ago. It was one of the advantages Napier had to bring unique designs to the market. The company depth of design inspiration from its vaults was as deep as its history. A designer could walk into the die repository and let the creative process begin. It would be much like a visit to Wolf E. Myrow, located in Providence, R.I., or CJS Sales Ltd. in New York, New York— with a seemingly endless supply of stampings, beads, and stones, the possibilities were infinite.

The design department worked as a team, and more than one designer could be assigned to a specific collection. With story boards finished, trends analyzed and design elements decided upon, each designer would then bring their respective creativity (design) to the collection. In a cohesive manner, a necklace could be designed by one person while earrings were designed by another.

As we record the history of these wonderful companies, we have the unique position to go back and ask designers to help with identification before the information is lost forever. The book, The Napier Co. identifies a smattering of designs with their respective designers, and we look forward to new discoveries as renderings surface and folks turn to their own records to answer the longstanding question, “Who designed this piece?”