BENICIA, CA (November 23, 2012) – ¬ÝAfter nearly six decades, the mystery surrounding the Napier Mamie Eisenhower bracelet has finally been revealed.¬Ý In December 1954, women‚Äôs editor Edyth Radom, of The Hartford Currant, wrote an expos√© on The Napier Co. Featured in the article was Napier‚Äôs most famous bracelet, dubbed by collectors today as the ‚ÄúMamie Eisenhower‚Äù bracelet.¬Ý In the article, readers were told that only two bracelets existed; one bracelet worn by Mamie Eisenhower, and another kept secure under lock and key by The Napier Co. The caption under the detailed sterling bracelet read, ‚ÄúThere will be no others.‚Äù This was a myth.

‚ÄúWhen we are dealing with limited-edition collectibles, we have to be sure the provenance is correct. I had to question the 1950s marketing of this piece.” said Melinda. “In the process, I not only resolved the mystery of the Mamie Eisenhower bracelet, I‚Äôve uncovered lots of common misunderstandings about The Napier Co. and brought to light hundreds of previously unknown facts about the company‚Äôs product‚Äîespecially the jewelry lines.‚Äù

“Forget about what you used to think about Napier. It‚Äôs a hidden treasure in the collectibles market of vintage jewelry,” says Lewis. “If you go by name only and believe that Napier produced exclusively modest tailored pieces, you‚Äôre going to miss out an opportunity to purchase some phenomenal jewelry.”

To learn more about the Mamie Eisenhower Bracelet or Napier jewelry, contact Melinda Lewis at 707-751-1665. To order your copy of the book, go to her website, www.TheNapierBook.com, where it is available for presale until December 31, 2012 at a $30.00 discount.‚Äù 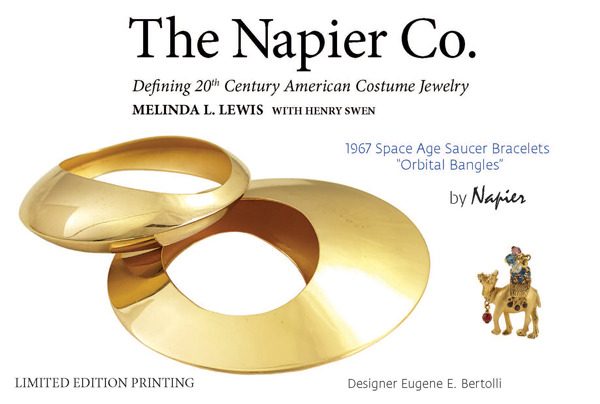 “Out Of This World! Jewelry In The Space Age” Forbes Jewelry Gallery Exhibit by Guest Curator Elyse Zorn Karlin The book everyone has been waiting for is finally ready for preordering! This is a Limited Edition Boutique Printing.