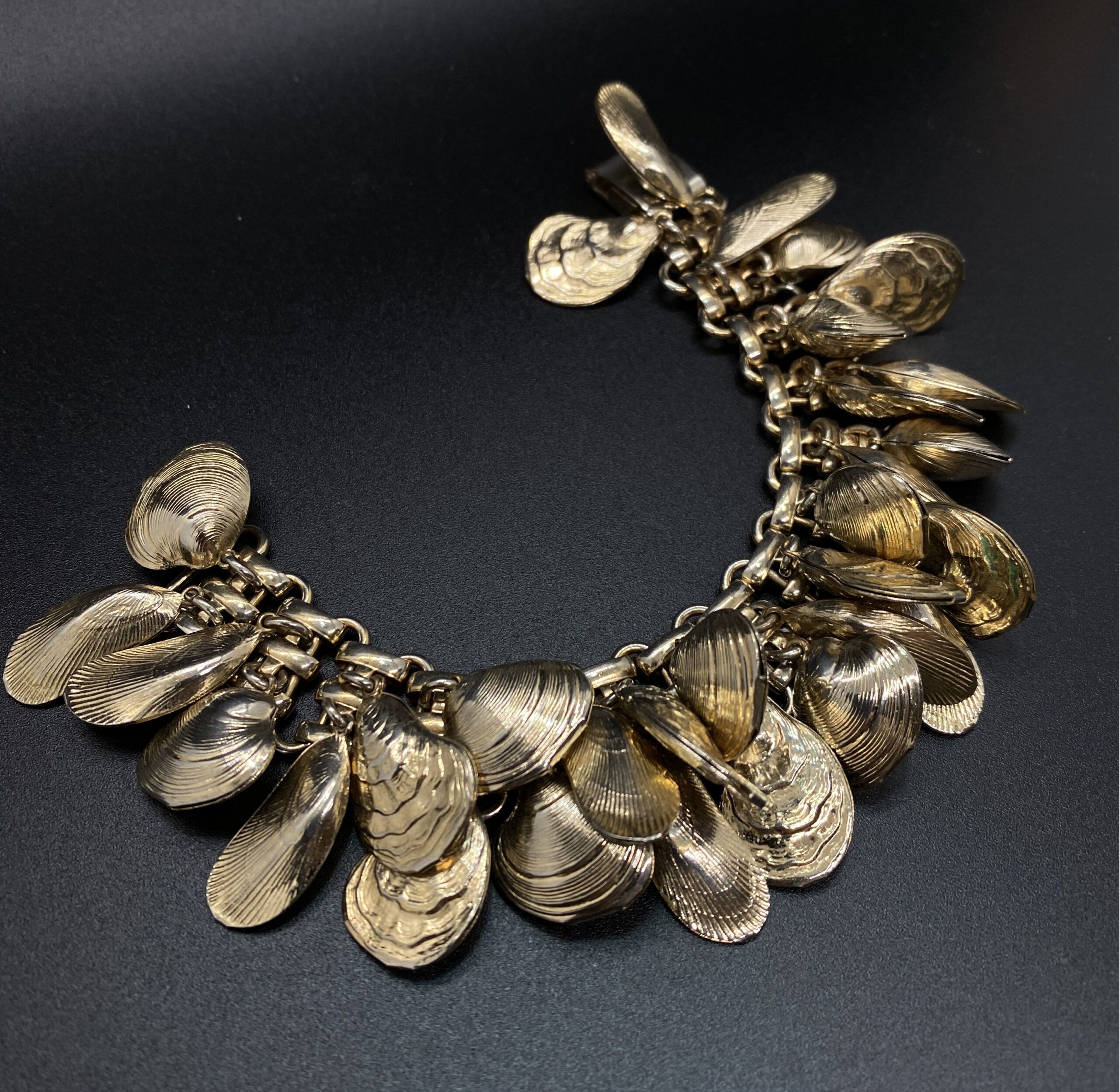 This is a spectacular vintage Napier Clam charm bracelet. This iconic bracelet was released twice in the line. It is a design of the late Eugene Bertolli. The bracelet made its debut in the 1950s and was reissued in 1980. It came in both gold and silver plate.

The Napier clam shell bracelet. If you follow us social media, you know that you should be making notations about items not in the book or corrections mentioned here. As a jewelry history, we have to be open to the idea that information about any particular piece has the potential to be fluid. Information thought of as accurate a decade ago may not be valid today. Our recent discussion on this Napier clam shell bracelet inspired me to research further. When I started this project, most information was oral history. Advertisements and articles were on microfilm, and little was available online. If information was available, it was expensive to access on a per-article-basis, and it was the roll of the dice if it would yield anything relevant.

First … on page 538. The top bracelet was reissued in 1980. Although noted correctly in the opening description, I had further stated in the second sentence it was from 1982. It could have also been produced in 1982, but in terms of the reissue date, 1980 is more accurate. (In the book, we always state the design’s first appearance, although many lines remained in production for years.)

The top silver bracelet on page 538 is the reissue. The bottom bracelet is the 1950s version. More specifically, this bracelet appeared in WWD in 1956. Both bracelets are marked “Napier” with a copyright mark.

Structurally, the chain is what appears different between the two pieces. The newer version has a round wire connecting the links, while the older version has a flat wire with indentations. To determine this, we looked at the 1980 catalog and compared it against our two pieces below. The bottom piece also has a Florentine finish on the clasp that we do not see in other 1980s pieces. The ad from 1956, although hard to see the exact details, looks like the flat wire construction. So with this information in mind, we are surmising that the link structure, not the trademark mark, differentiates the two versions. Of course, new information may come to light with a better picture of a 1950s version, but this is the best information we have now.